At Freys Hotel, we really want you to enjoy your stay in Stockholm. But as well as providing the best starting point, we also want to do what we can to contribute to a better society.

As a company, we believe we have excellent potential to contribute to a better society. We want to try to do a little more for the world around us. Our work encompasses, for example, internal environmental work, as well as contributions to various social projects. We are eco-labelled to Green Key, which places some tough demands on what we do. This in turn enables us to impose strict demands on our suppliers and business partners.

At Freys Hotel, we support the following organisations:

Ersta diakoni:  A non-profit association that works in healthcare, social work, education and research professionally and not for profit.

Since 2011, Freys Hotel and Belgobaren have been inviting those most in need to celebrate Christmas with us. Via Ersta diakoni, this enables us to provide vulnerable people with a bit of enjoyment: a warm, comfy hotel bed, a Christmas present, a good Christmas meal, a cosy seasonal atmosphere and a generous buffet breakfast. Christmas is a great time of year for us to help others.

In addition, the money we have donated has gone to help children, young people and the elderly in Ersta’s activities. The money pays for a few extras that Ersta cannot afford on county council grants alone.

Our popular Freys Bears are sold for the benefit of various Ersta activities. During selected periods, we earmark the funds for specific projects.

RealStars, Hotels Against Trafficking: An independent non-profit organisation established in 2010. The organisation combats human trafficking in Sweden and the EU through opinion leading, and through various campaigns founded on the General Declaration on Human Rights. As a company in the hospitality industry, we see an opportunity here to help increase awareness of these problems. We train our staff in detecting suspected prostitution and establish routines on how to act and when to call the police. We also communicate at the hotel that we have taken a stand on this issue, to clarify that we are extra vigilant and stand for Fair Sex. All this is done is association with RealStars.

Freys Hotel is the proud sponsor of 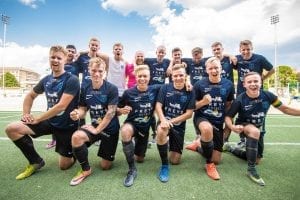 Stockholm al Stripes Sports Club: Sweden’s largest LGBTQ association which is open to everybody, but is primarily intended for homosexual and bisexual people, and transpeople. Since summer 2006 the association has been active in various sports, and has divisions for men’s football, women’s football, floorball, bowling, athletics, volleyball and other sports. Several of the association’s divisions regularly take part in different LGBTQ competitions around the world, with successful results. Sponsoring an association that chooses to include everybody regardless of gender, sexual orientation, ethnicity, or age seems like the right thing for us at Freys Hotel to do. Freys has been sponsoring the Stockholm Snipers men’s football team since 2012. This is perfectly in line with our ethos. We respect each other and our differences. We allow each other to be unique and to think freely. It’s the blend of people that creates the dynamics. There will always be room at Freys Hotels for people’s differences and individuality.
At Freys Hotel, we love the word DIFFERENT!